Sometimes the ingredients chosen for a recipe are not always what we might naturally graviate towards. Cinnamon is more common than straight nutmeg as a spice in apple dishes. Sage is not often added to something sweet. This tart is such a dish. It contains four of the flavours associated specifically with Samhain and was made and baked at an “Herbs of Samhain” workshop over the weekend. We spent an afternoon creating dream pillows with mugwaort and yarrow, baking seasonal sweets and concocting elderberry beverages (another Samhain fruit).

Give it a try in your home. You might find a new family favourite. 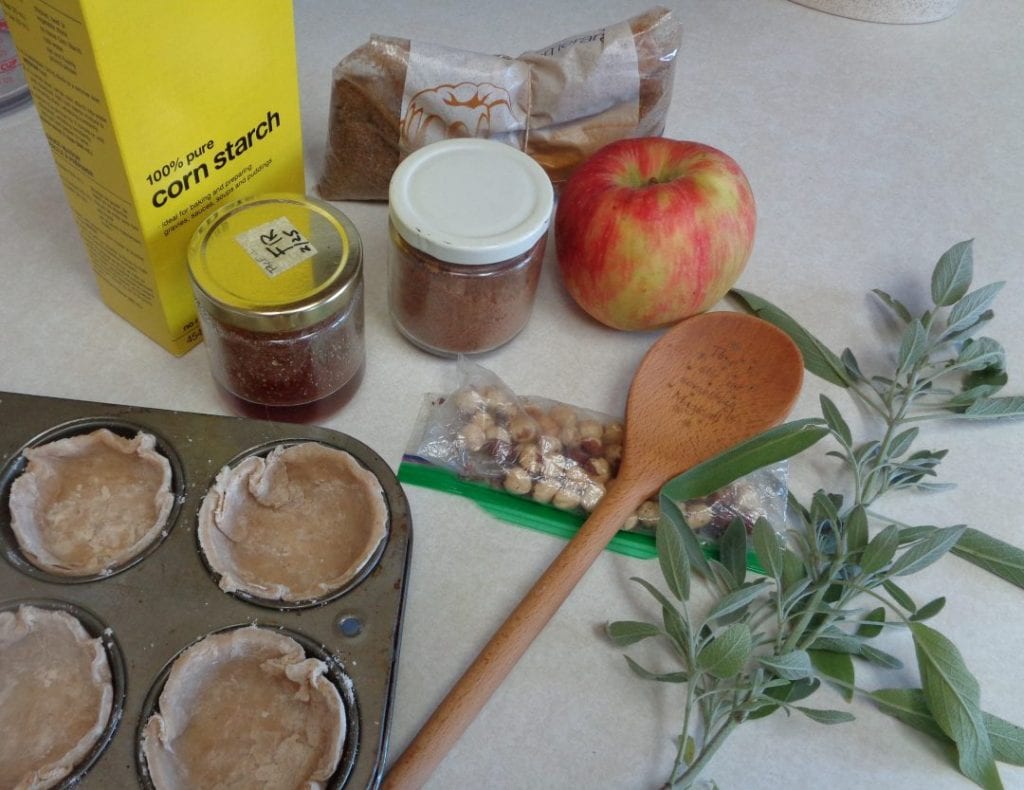 Preheat the oven to 400 degrees F.

Wash hands, take a deep breath, release. Bring focus into the present moment and invite in the compassionate spirits. Begin.

These were intended to be a casual/rustic tart. If making your own pastry, try adding the nutmeg directly into the flour instead of the filling. It is possible to also purchase ready to bake pastry to cut out and use in the muffin tins or ready to bake tart shells that will need about half the amount of filling. To shorten the time taken to get the tarts in the oven, I brought the shells already in the muffin tins and we moved on to putting the filling together. 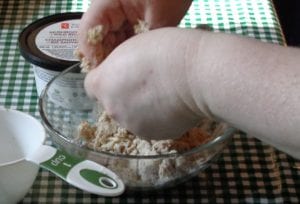 Each participant took on one aspect of the process.

The oatmeal was chopped a little finer and then the flour, butter, brown sugar, salt and oatmeal were combined to form the struessel.

This process can be done with a fork but goes much more quickly with warm fingers.

The reason the rolled oats were chopped is that we were making tarts and that means a small surface area to cover. Had the topping been for a pie, this step would probably not have happened. 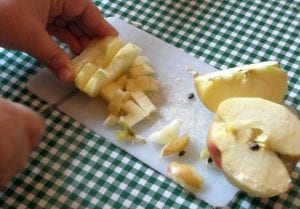 The honey crisp apple I took along was large so we had a little fun and had the single women do the peeling.

The tradition is that uncommitted women would peel an apple, starting from the top and going around the apple to form one long peel. It was then dropped on the floor, sometimes over a shoulder, with the hopes that the initial of their true love would be formed when it hit the ground.

My old fashioned German peeler was a bit of a struggle but in the end we had a definite “J”, a possible “U”, diced apples and a lot of laughing. 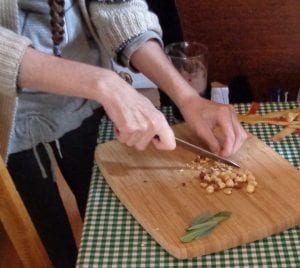 The nuts and fresh sage were expertly cut into smaller pieces and then the apples, nuts and sage were combined in a bowl along with the honey, nutmeg and applesauce.

Once everything was in the oven, we realized that many cooks had once again missed something as the cornstarch had not been added.

So here is a fuller explanation and you can decide how you would like to proceed. The purpose of the cornstarch is to thicken the juice of the apples as they cook. There are hundreds of varieties of apples, some hold their shape as they cook, others cook down to mush.

Honeycrisp is pretty good at staying in good form. The applesauce was added to help with moisture and in the end the lack of cornstarch was not an issue but if another variety is substituted it may become one, depending on how that apple bakes. Too much liquid and the pastry at the bottom will be (technical term here) mooshy. 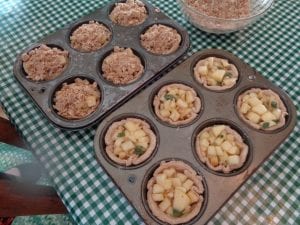 Divide the filling between the prepared tart shells and then top with the struessel topping.

I have a love/Grrr relationship with the oven in the location of this class, so I gathered everyone up and got them to take a deep breath, focus on the intention of our efforts turning out well before putting the tarts in the oven.

Under normal circumstances I would just say 20 – 25 minutes. In this case however, the thermometer said 450 degress, the digital oven said 400 degrees, the tarts went in on the top shelf as rarely does anything brown otherwise and at 30 minutes they were still pretty light. 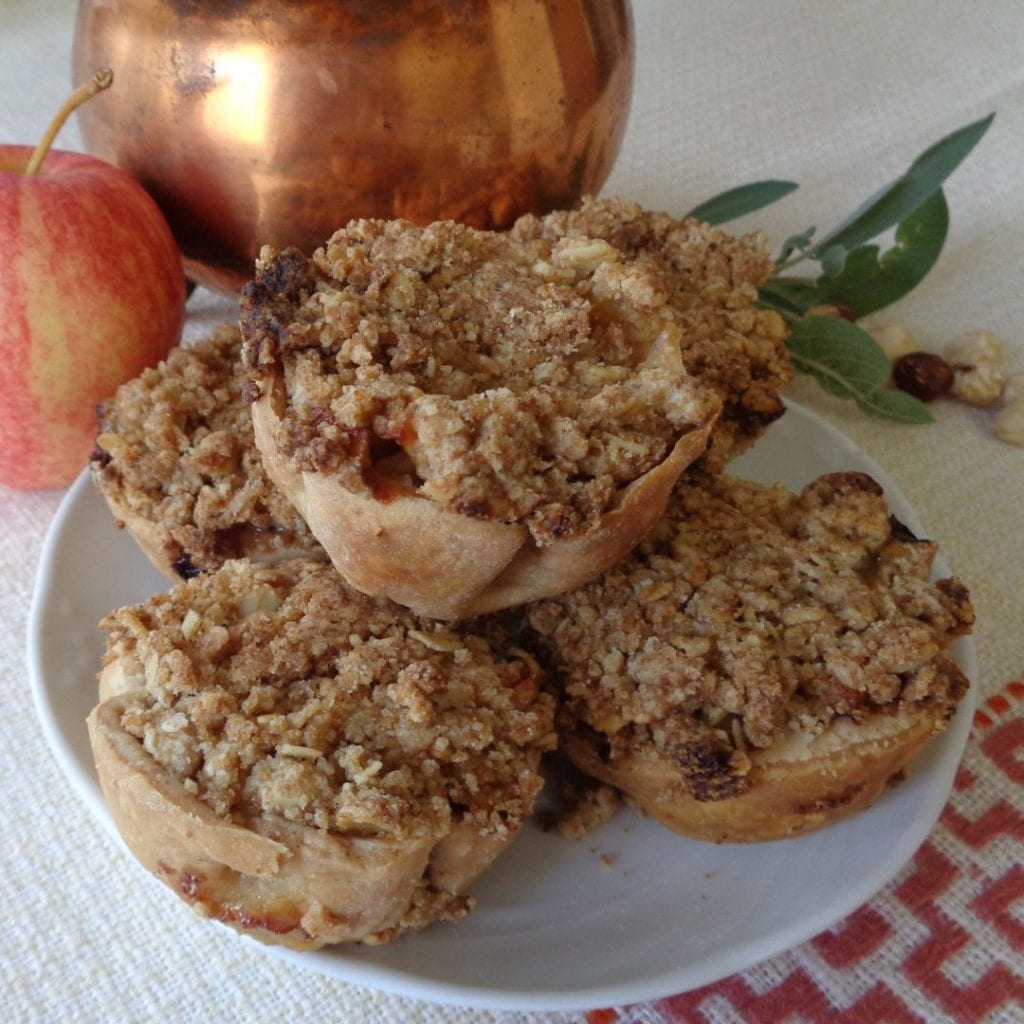 The filling was however starting to bubble so they were left in another 15 minutes. When your tarts are baked. Let them rest in the form for about five minutes and then gently remove the tarts and transfer to a cookie sheet to cool a little more. If any of the liquid has acted as glue and attached the tart shell to the form, use a sharp knife to gently loosen. The warmer the sugary “glue” is, the easier it will be to release.

When serving, you might want to leave an open place at the table with an extra tart to welcome the visiting spirits this Samhain.

Seasonal offerings are commonly, wheat, dairy and sweetener so this tart was served up with a few shavings of Parmesan-Reggiano but ice cream works too. 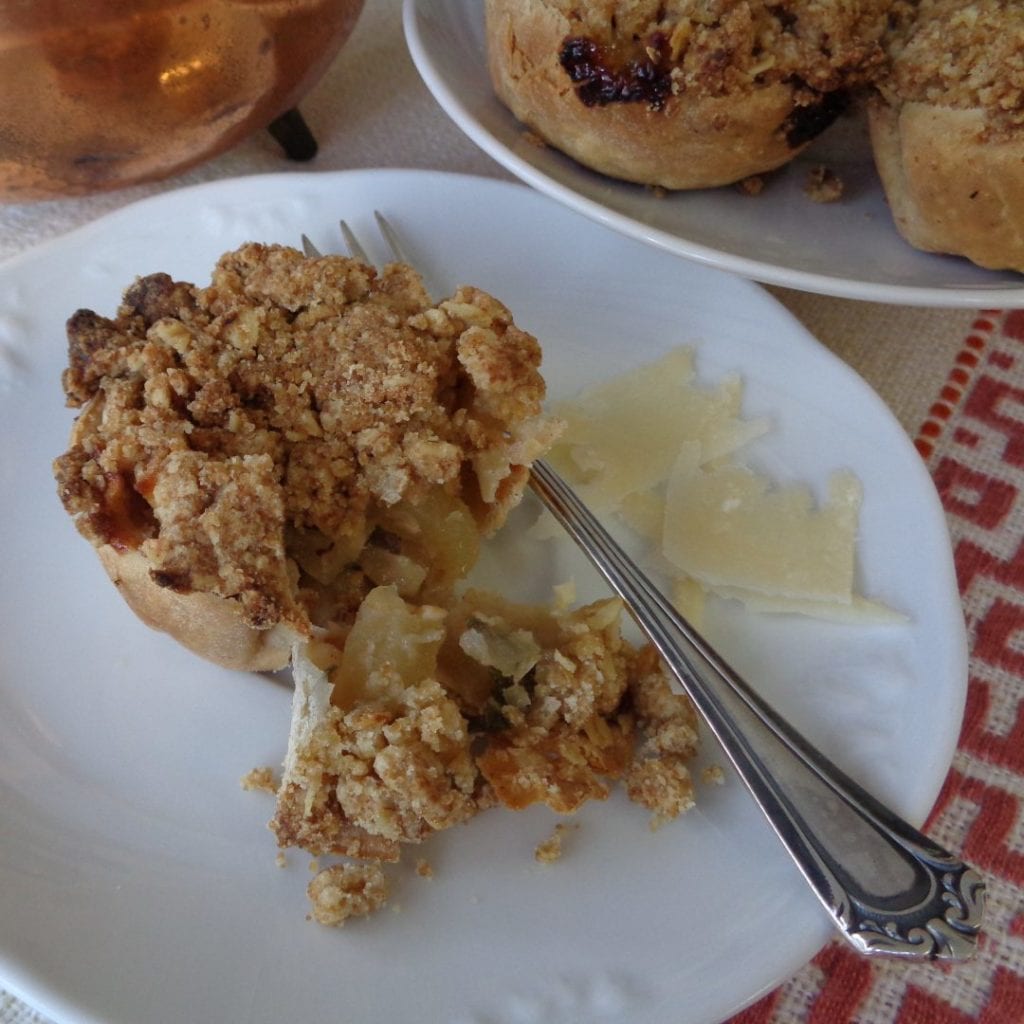 Samhain Tarts from My Kitchen Wand

Posted in Pie & Other Pastries, Samhain/Halloween. 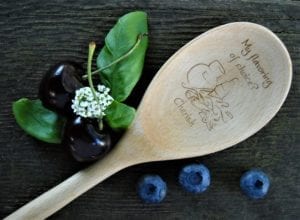